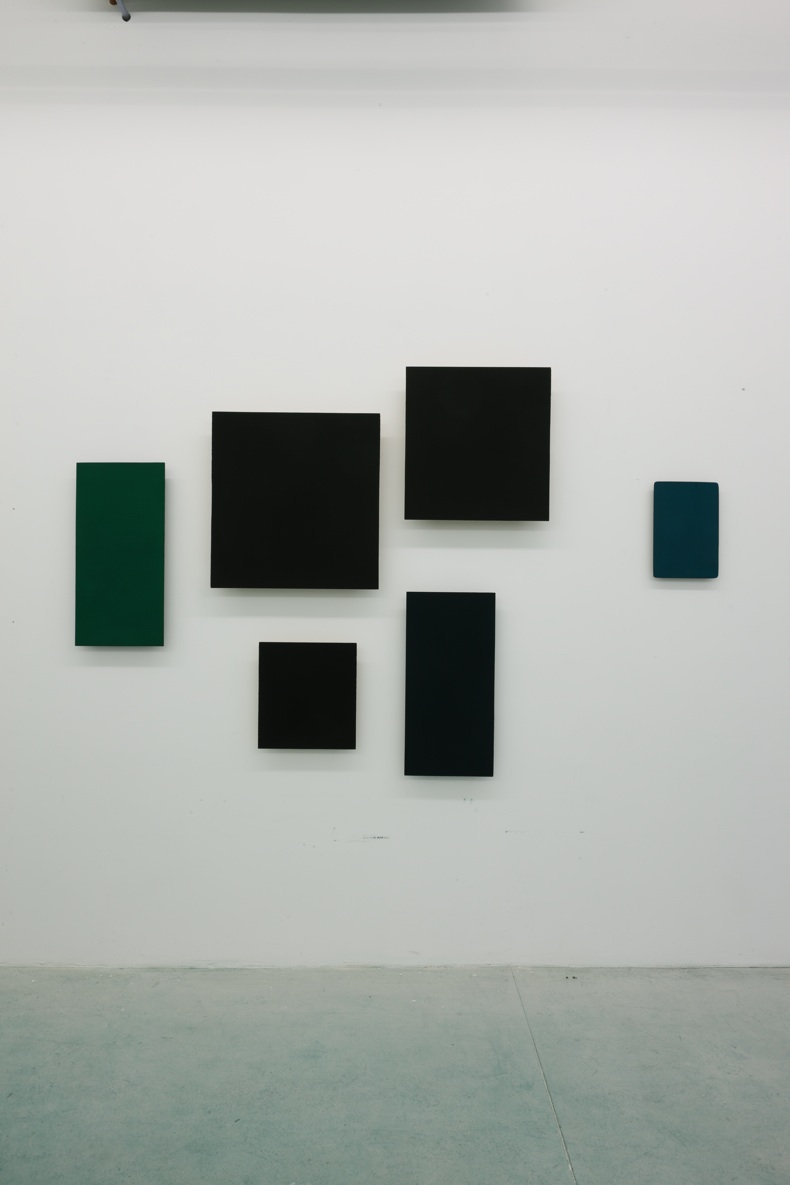 The exhibition Vertigo of Painting allows the full depth of thought to burst forth in a precise gesture. From the infinitesimally small to the infinitesimally large. Looking closely at the works on paper by Agnes Martin, the eye fixes on the light touch of the drawing within a given space, which is prompted to open up by the repetitive and infinite nature of the subject. The painting is transformed into a sensitive interface that reflects the emotion created by the artist in the world, such as Fred Sandback’s frail painted sculptures of geometric forms. A sensibility both contained and, at the same time, made volatile.
The exhibition invites the viewer to penetrate the microcosm of the canvas until being seized by it (Günter Umberg, Albane Hupin). Mark Rothko referred to this back-and-forth in his remarks on his series of Seagram murals: “my images have two characteristics: either they dilate and then open up in all directions, or they contract and then close up precipitately on all sides. Between these two poles lies everything I have to say.”
With the detail as point of entry, the viewer’s eye pierces the canvas and sees the intimacy linking the painter and his work. For Daniel Arasse, “details give access to a painter’s secret: the desire to avoid an intelligible communication that would compromise his enjoyment. That which makes a painter want to be a painter.” It is thus probable that the artist hid a message (Walter Swennen), or the things about painting that are left unsaid (Victor Man). Cécile Duval’s documentation explores the enigma of the thousands of albums of images in the fonds Maciet (Musée des Arts Décoratifs, Paris), named after Jules Maciet (1846-1911), the passionate collector who preserved reproductions of artwork spanning the centuries. Her interventions on the images (cleaning photographs, reframing, blur effects while shooting) are closely related to the work of a painter.
The attention given to detail renders the machinery of the painting visible. One must come very close to the textile works of Heather Cook, to get lost in the folds, in order to see that they are created entirely through trompe l’oeil effects using fine droplets of bleach. And yet Daniel Arasse emphasizes that “the detail is a digression: just as in a speech the argument can’t be too long for risk of losing sight of the subject, details are an embellishment that shouldn’t captivate too much, for risk of losing the painting as a whole.” Subtlety of execution should not draw attention away from the painter’s tenacious preservation of the indeterminacy of the work (Julien Carreyn). The viewer is also invited to move about, to find the right distance that highlights the instability of the images offered for viewing (Cécile Bart).
Alexandra Fau